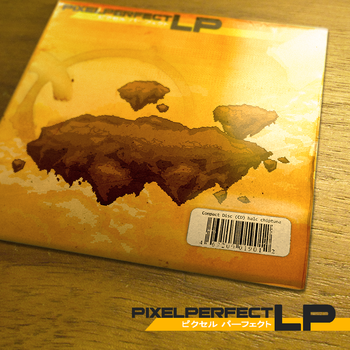 How fitting that the second double review, possibly in existence, contains halc just like the first. And that it’s the Pixel Perfect LP, the follow-up to the EP that was in the first. And one that, looking back at the review for the EP, that I had in fact wished for. As for the second album, it’s The Sound of Speed, halc’s OCR directorial debut. So get ready for the halc-stravaganza, as this double review is dedicated to him!

4. Floating HigherÂ Â Â  2:00
The sequel to Floating Away from the EP? Probably, and it does feel ethereal and floaty. The main melody is pretty mesmerizing. Switch-up at 0:50. Not much of a sequel when it’s a minute shorter than its predecessor. Breakdown at 1:36 or so heralds the impending finale, which occurs at 1:53.

6. Higher ReasoningÂ Â Â Â  4:18
Slow start, but it works. Still slow and calm at the minute mark, but picks up at 1:19. Has some instrumentation reminiscent of some of bLiNd’s work at around the two minute mark. Breakdown at 2:25 heralds more to come, and it builds up until 2:56, when something big is on the horizon of the soundscape. Sure enough, the impending event takes place at 3:09. Slowdown for the last 30 seconds.

7. Pixel PerfectÂ Â Â Â  2:07
It’s title track time, people! And it’s apparently party time too, judging by the start. Melody at about 0:28, leading up to the inclusion of more percussion at about 0:45. Instrument change at around the minute mark. Change back to the original sound at 1:32 or so, leading up to both at once at 1:44, and then the finale at 1:58.

8. On + OnÂ Â Â Â  3:08
How haunting of an intro here; well done with the chipambience. Chipchimes at 0:32, and some percussion in the background. More instrumentation at 0:52. Breakdown at 1:08, interspersed with various effects until 1:42 when instrumentation returns. This song feels like a dream. It keeps building and building until 2:16, when it explodes into what can only be its final form. Slight breakdown at 2:32, which signals the coming end of the track, and subsequently the album. Fades out to nothingness. I am sad now.

THE SOUND OF SPEED

2. OA, Scaredsim – The Sound of SpeedÂ Â Â Â  3:21
And one of the most familiar tracks in gaming gets a rockin’ facelift yet again. Guitar comes in at 0:18. Dual guitar tones at 0:27 or so! At least this song doesn’t start out with HEY IT’S THE PARTY SONG!! PARTY’S OVER HERE!! Just kidding, I love that part. Anyways, pretty faithful mix. Or at least, it is until 1:54 when the mixage begins. OA and Scaredsim did great on giving this a tropical feel while keeping it rocking. Throughout the solo, the crescendo plays continuously in the background. Back to source at 2:49.

3. halc, Insixfour, ProtoDome – Shifting IslandsÂ Â Â Â  3:38
Now my favorite Marble Zone remix happens to be Metamorphic Rock, but this take on it… well, it’s in its own league, and I mean that in the best way possible. Source comes in at 0:18 or so. Violin comes in at about 0:49. Classic halc chiptuna mastery comes in at about 1:25. More violin at 1:53. Breakdown at 2:27 or so, pure chiptunage follows until 2:46 when it all comes back. Simplicity from 3:22 or so until the end.

4. GaMeBoX – Subsonic SparkleÂ Â Â Â  3:21
And here I was thinking I’d never be able to review a GaMeBoX mix… Silly me, guess I was wrong. With the first of three Special Stage mixes, GaMeBoX puts his trademark style on this classic track. Source comes in at 0:20, with wah guitar at 0:27 and 0:34, and many other places throughout. Nice guitar usage from 0:54 or so until 1:12. The ring loss sound effect is put to good use in this song, along with several other tracks. Some chimes in the background at 1:44, and a breakdown about ten seconds later. Breakdown from about 2:52 until the end, with some elaboration starting at 3:02 until the end.

5. halc – Spring JunkieÂ Â Â Â  3:45
I wonder if the duo of junkie-titled names was intentional… Anyways, pure halc here, just like in the above album. Except for the fact that those are original and this is not, and a mix of Spring Yard Zone. Some source comes in at 0:48 like a flying saucer. Listen and you’ll understand. More source at 1:11 or so. Slight breakdown at 1:30, with some awesome chiptuna at 1:40 or so. Great sound effect usage, a technique that seems prominent with this entire album. Slowdown at 2:25 or so, with source at 2:44. Simplicity reigns from 3:02 until end, with sound effects interspersed throughout.

6. Benjamin Briggs – Bubble JunkieÂ Â Â Â  3:32
And now for everyone’s favorite stage, Labyrinth Zone. With its deadly waters and awesome boss fight, how can you not love this zone? Okay, so the stage itself sucks, but the music is phenomenal. As is chth’s take on it. Nice magic-box effect at 0:42 for the source to come in with. Also, I don’t care if he’s going by his real name now, he is and always will be chth to me. Spring sound, among others, at 1:11. Bubbly take on the source at 1:55 or so, and mixes with the wah effect afterwards. Remixage begins at 2:30 or so. Nice take on it to coast to the finish, and slowdown for the final seconds, with a sudden end at 3:28.

7. Joshua Morse – Fifty Rings to RideÂ Â Â Â  4:11
JM takes the second Special Stage mix, with a title that doubles as a game hint. Source comes in at 0:27. Sounds like he slowed the tempo down a bit; it works quite well. Classic Morse instrumentation and jazziness. Sexy guitar, ethereal instruments… it’s beautiful… Ahem. Brief breakdown at 2:05. 2:51 brings in some DO-DO-DO-DO-DOOOO… fits in perfectly with the track. More source usage at 3:17. 3:50 heralds the end of the track.

8. DrumUltimA, Harmony – Under ConstructionÂ Â Â Â  5:30
And for the longest track on the album, we’ve got the Star Light Zone remix. And it starts simply with acoustic guitar and some chimes. Chimed source at 0:35 or so. And guitar source at 1:14 or so. What I never got was why it was Star Light Zone and it took place in a construction zone. Shouldn’t it have taken place in space or a planetarium or something with that name? Eh, no matter. Da-da-da-da-daaaaa at around the 2:40 mark. 3:20 brings in some remixage, queued up by Doug’s mixer name being sung. And then more guitar and singing queued up with Harmony’s name being sung. With epic drums continuing. I have to say, this song is like ten times more awesome in headphones than via my crappy lappy speakers. It calms down at 4:35 or so, and remains calm until the end.

9. Brandon Strader, Rexy – HogtiedÂ Â Â Â  4:43
Epic boss mixage right here. By the way, last time I checked you could find a midi version of this on VGMusic under Newly Submitted Files, and it’s by Rexy, so that’s pretty cool. It doesn’t take long for the source to start, and Brandon rocks the guitars in this. Main source at 0:54 in epic guitar. The percussion in this keeps a fast beat that makes me move to it. 1:41 brings Rexy in to the main picture with some jazzy guitar. 1:58 has Brandon take his own version of the mix, and it’s pretty sweet. It’s also a segway into Rexy’s awesome take with more guitar over it. 2:49 brings in the start to one of the more epic parts of the song, building and building until it explodes at 3:22 with more guitar source usage. 4:12 brings the start to the finale with rising notes that culminate in brief source usage that fades to silence.

10. JosÃ© the Bronx Rican – CaosÂ Â Â Â  4:34
And now for the final take on the Special Stage theme. In my opinion, this is the most meticulously detailed one of the three, fitting for OCR’s resident rapper and media man. Source comes in at 0:34 or so. If you listen carefully, you can hear so many things at once it’s insane. More source usage at 1:22 or so. 2:00 brings in the start of JosÃ©’s remixing of the source, filled with various jingles and brief snippets other tracks from the game as well. 2:46 is the start of an epic piano solo, lasting for an entire minute!! Listen carefully for the aforementioned aural allusions. Background source usage at 3:30 or so. The last minute is very toned down, but it works. After that piano solo, you need a cooldown period.

11. WillRock – Clockwork CriminalÂ Â Â Â  3:28
Starts out with sound effects, and source comes in at 0:30. Trademark WillRock sounds come in at 1:01. Sound effects are in the background throughout the entire song, but are most prominent as the bookends, so to speak, for the track. 1:47 brings in the genesis of what we all know Will loves to do, and that’s rock out like a Brit. And judging by past British bands, they rock out quite hard. 2:17 has his synth guitar squeal that we all know and love. And again at 2:46, albeit briefly. 3:20 takes the sound effects and ends the track.

12. Jewbei – Final ProgressionÂ Â Â Â  4:36
Ah, bLiNd’s disciple… good guy, good mixer. He’s learned much, and that’s blatantly obvious with this take on the Final Zone theme. Hints of the source come in at 0:31, and the full source begins at 1:41 after a breakdown at 1:11 and buildup at 1:28 or so. Trance-tacular!! Nice usage of ethereal chimes at 2:18 or so for more source. This just builds and builds and builds, kind of like Robotnik’s wrath I suppose. This is Sonic 1, so he’s being called Robotnik. It’s only fitting. 3:38 or so brings a slowdown and gradual removal of parts, until 4:20 when it becomes obvious that this is the progession to the final seconds of the track.

13. Brandon Strader, halc, WillRock – A Hog in His PrimeÂ Â Â Â  5:36
The credits medley, always a classic. Starts out with Special Stage usage, and sound effects. What else? Guitar comes in at 0:24. Awesome bass at 0:46 or so. Green Hill Zone at 1:04 or so, and more guitar courtesy of Brandon at 1:22 or so. More Special Stage at 1:49. Marble Zone, with wah, at 2:24 or so. Star Light at about 2:40, with chimes. Guitar starts at 2:52. WillRock’s synth at 3:23 goes wild. This is the solo that wasn’t in Clockwork Criminal. Breakdown at 3:52. 4:06 brings in epic finale, and 4:18 has Brandon showing off his recorder skills. For your information, these were previously seen in Monkeys DisarmÂ Their Kremlings, from Serious Monkey Business, back in 2010. The recorder continues until very close to the end… but unlike most final tracks, this one doesn’t end with a peaceful fade. 5:17 brings in Brandon rocking the OUT OF BREATH jingle that closes out the album.

Well, truth be told I’ve reviewed three albums this night. First was DjjD’s Uprising, which you can read about elsewhere on this site. This double review was created to quickly shrink my backlog of albums I need to review. And I think it went well. Pixel Perfect LP was great, albeit brief. But mixed with the EP and you’ve got a damn near complete album. halc’s chiptune skills are definitely improving with age, and practice no doubt, something evident in his recent singles and in his work on these two albums.
As for the others involved with Sound of Speed, they’re pretty awesome too. A lot of love went into all of these tracks, and it shows. WillRock did a phenomenal job with his tracks, and Brandon rocked the holy hell out of what he was tasked with. Jewbei is starting to show signs of matching his sensei’s skills, if not surpassing him, with the potential shown in his, and chth gave Labyrinth Zone a nice spin. I’d request a mix of that from Insert Rupee, but since both Ben and halc have mixed that track on their own, I don’t think I need it. And the three Special Stage mixes were all beautifully done, created by three masters of their style. And the others involved did great as well. Next time I’ll be reviewing ProtoDome’s BLUENOISE album, followed by Benjamin Briggs’s Attention Deficit EP. Until next time, game on!!