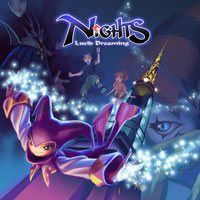 In an earlier update, we recently mentioned the trailer release for Stevo â€œLevel 99â€ Bortzâ€™s long awaited project. With over thirty talented musicians skillfully arranging tracks from Sega classic NiGHTS into dreamsâ€¦ over the past two years, this project highlights the first Sega Saturn title to receive an OverClocked ReMix album.

Today marks the official release of NiGHTS: Lucid Dreaming! Directly created by fans for fans, this project features a diverse array of genres that have been influenced by the NiGHTS musical dreamscape motif. Lucid Dreaming has also had the luck of being the first OC ReMix album to be heard by both the game’s creators and lead composer.

With the project intending to promote the music of NiGHTS into dreamsâ€¦, Bortz recalls about his own unique vision for the project: “To me, NiGHTS into dreams… defines what the essence of the Sega of old was: creative, original, adventurous, and memorable. The music was the most memorable part of the game for me: I’ve been listening to the soundtrack for 15 years now. Despite being a cult classic, NiGHTS has not received its due attention over the years. Two years ago, I started this album, hoping to pay respect to the music, the game, and their creators through art and sound. I couldn’t be more proud of the amazing work everyone put into this album, and I hope you all enjoy it!”

So there you have it. Congratulations to OC ReMix, Bortz, and everyone involved for giving us such a solid album. NiGHTS: Lucid Dreaming is available for free download here.