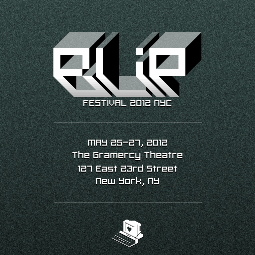 With the event website now up, we’ve just received word about Blip Festival 2012, taking place in NYC on Friday, May 25th to Sunday, May 27th:

Thrift-store electronics collide with dancefloor sensibilities as Blip Festival makes its long-awaited return to New York City. Produced by 8bitpeoples in association with The Tank and Live Nation, the Blip Festival 2012 finds Manhattan once again at the center of the chipmusic universe. From May 25-27, musicians and visualists from all corners of the globe assemble at the Gramercy Theatre to perform astonishing music & motion graphics, produced on and inspired by early-generation home computers and gaming consoles.

Presented by leading chiptune label 8bitpeoples, the sixth annual Blip FestivalÂ promises yet another explosive round-up of the world’s chipmusic talent, with top-notch performances by Burnkit2600,Â Danimal Cannon, CHiKA,Â Graffiti Monsters,Â Pulselooper,Â Wizwars, and waaaay too many more rad artists to list with more to be announced soon. Â Single-night and three-day passes are both available in limited quantities, so buying a ticket immediately is strongly encouraged. So, what are you waiting for? Don’t let one of the most exciting nights for chip music pass you by and be sure to take billions of pictures and videos for us!