Remix64‘s Remixer of the Year Awards 2011 was hosted today on SceneSat RadioÂ with the first part of the show starting off with an extensive recap of 2011, showcasing top tracks of each month and scene happenings. With the second half featuring the actual award show,Â the results have been quite thrilling:

The first awardÂ Best Newcomer 2011Â was awarded to SID legendÂ Peter ClarkeÂ by Mordi, who had won the award in 2008.

HazelÂ wonÂ Best Veteran 2011, which was personally handed over by Makke, who was 2006s best veteran.

The price forÂ Best c64 RemixÂ was awarded toÂ Warhawk (HalcÃ³n de la guerra mix)Â by scene veteran N-JOY. The award was presented by Andreas WallstrÃ¶m of c64.com. It should be noted thatÂ Kate Z.Â would have actually won this category with her Tusker remix, if the votes for both versions (vocal / non vocal) had been combined.

We would like to congratulate those who made it on the lists this year and the winners of each award. Without such a great community, we would like to think that the VGM scene would surely falter from lack of support. Keep up the good work! If you missed the actual event, you can use SceneSat’s reLive feature to catch the show in its entirety. Remixer of the Year 2012 has also commenced, so don’t forget to vote. Here’s to hoping that next year’s show will be even more astounding! 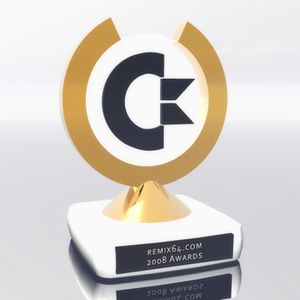 Awards, ho! Remix64‘s Remixer of the Year Awards 2011 is scheduled to air this Saturday, January 28th:

Yes, on January 28th, the Remix64.com Remixer of the Year Awards 2011 will be aired. The show will be hosted by SceneSat Radio and simulcast on SLAY Radio and Radio 6581 and to most certainty also on BitJam and Nectarine Demoscene Radio.

It will feature a bunch of well-known remixers and scene profiles to give you an evening of fun and great music and there will also be a live videofeed to give you a peek into what’s going on behind the microphones.

A live video-feed and well-known remixers?! We are definitely hooked. If you can’t sit around your computer that evening, we’ve got you covered. ThaSauce will be sure to post both updates and winners from the ROTY event. Be sure to check back to see who the winners for 2011 are!