Japanese doujin arranger Sabao pays tribute to Virt in his recently-released cover of the Stage 1 Jungle theme from Contra 4, which is itself a remake of “Vile Red Falcon” from Jake’s Konami-styled chiptune album FX2.

Grab the goods from his MP3 page (or here if you prefer a direct link), and be sure to check out his other stuff too!
I’ve actually highlighted Sabao before in a previous Spotlight about his jazzy “Demon Seed” arrangement, but I felt he deserved a second round of kudos for this ROCK’N remix. Thanks to Nitouhei for providing the heads-up on his excellent blog.

(NOT OVERCOAT 😉
Hey there!
Last wednesday was our 1½ birthday with www.reunionstudio.org and about 12 hours ago (a little late i know but we had some minor issues) we released our celebration compilation called “Vast Present & Future”

it’s a suuuuper release with 12 new tracks from our reunion
members, a suuuper cover made by the Art Director of a suuper record
label called Playground (Rasmus LindÃˆn).

since this is our first
REAL compilation i wanted it to be perfect so i’ve worked and worked on
the compiling for many many months now. and i’m actually quite proud of
the result.

check it out won’t ya?

You may remember a post Larry made awhile back about how rok and rawk of Project X live on and have started a new band, Clawjob. Well I picked this up in a MySpace bulletin earlier today:

In yet another in a series of honors, Clawjob has had its legacy cemented by the world’s foremost lexicon of rock lore, Uncle John’s Bathroom Reader Plunges into Music!

In a bold, forward-thinking move, these great compilers of rock legend have taken it upon themselves to alter the plot of Space Crackers in their synopsis, so as to preserve the album’s mystery for the sad few who have not yet heard it.

You can purchase a copy of the book here, and do not resist adding five of these to every order!

This is my tribute to the Donkey Kong Country series on the SNES, but
mainly to the man behind the great soundtrack, David Wise. He is one of
my favorite musicproducers and have been a huge inspiration to me.

All the tracks on the album are based on a sample from the soundtrack.
Then I have mashed these samples to either hip hop or RnB acapellas. On
top of this i have added alot of my own production like drumloops,
basslines, effects, samples and synths. I also have to thank
“Pinkoloss”, an amazingly talented friend of mine, for making the
fabulous cover art. I recommend you to visit his blog (adress is above).

Worst title ever, I know, but seriously worth a read 😮

From the Capcom Community Blog:

As you probably already know, our recent Capcom Digital Day event
was a media event. Meaning, the invites were extended only to gaming
press and media folks, as opposed to the general public. What you
probably didn’t know was that we actually extended a few “community”
invites to the Capcom community: Loyal Capcom community fans who
happened to be located around the San Francisco area.

I followed two of them, Tony and Alex, around for most of the event,
getting their informal impressions on what they saw and taking pictures
of the whole thing. At the end of which held a special surprise for them! 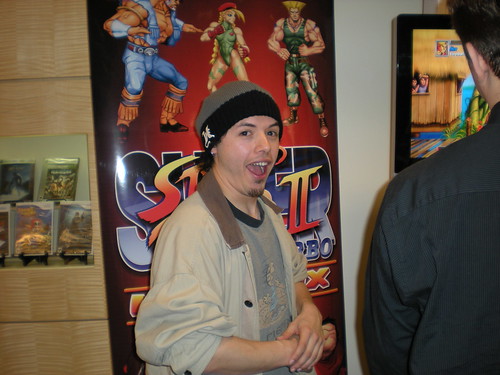 Alex is your normal average Street
Fighter fanatic, except for one thing: He was actually contracted to do
a few music tracks on the upcoming SSFIITHDR. Because of this, getting
to see SSFIITHDR was especially satisfying to him (He hadn’t actually
seen it even though he did some tracks for it), and the bulk of his
visit was spent on the SF Kiosks. He’s no fluke too, and handed out
plenty of butt-kicking to all challengers. As a gamer, he was no fluke
as well, as he set the record for the lowest time in the Bionic
Commando Rearmed Challenge Room challenge that we had laid down to
everyone present, besting all the gaming “professionals” (To bad his
score didn’t count, as he set the record on his second, unofficial, go
around). 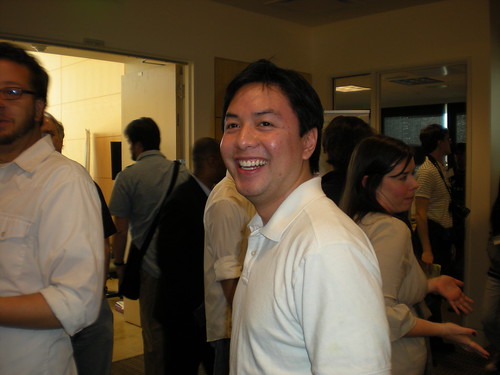 Intrepid web programmer by day, closet gamer by night, Tony was
another community member we invited who was also a Street Fighter
fanatic. So much so, he was especially stoked that he got to meet Seth.
A well rounded gamer, Tony tried his hand at all the playable titles on
the floor, after which he assured me he would definitely be buying a
few of them given how awesome they were, with SSFIITHDR and BCR at top
of his purchase list.

After the event ended, came the special surprise we had for them.

Although it wasn’t on the itinerary, as the event winded down, I
escorted them to the elevator and snuck them upstairs. They thought I
was going to silence them permanently and then dump their body where it
wouldn’t be found since they had just seen all these then-secretive
announcements. 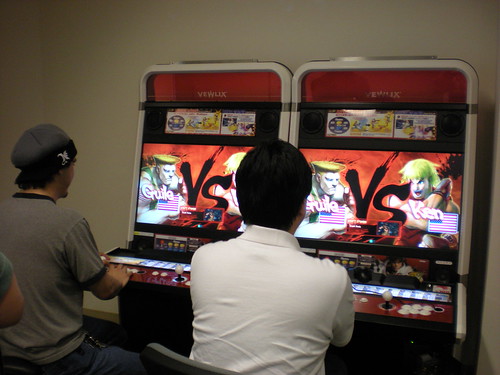 The two of them got about 30 minutes of alone time with Street
Fighter IV. GDC notwithstanding, I think Tony and Alex are among the
first in the “general public” to have gotten to play Street Fighter IV.
Up until the event, they had only seen screenshots, which they both
noted don’t do the game justice. The game has to be seen in motion,
with your own eyes, to be believed. 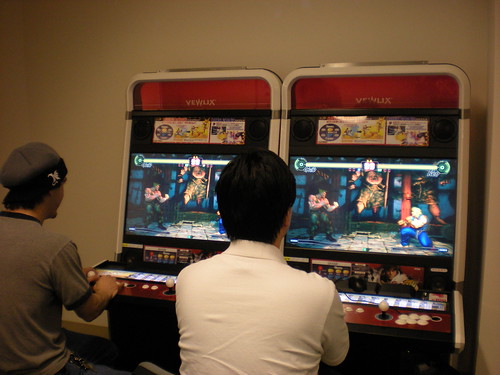 It was interesting to note that the first characters chosen was Ken
and Guile, even though they did eventually ran through the gamut of
characters, including Abel and Crimson Viper (Both of which they
thought was very cool). 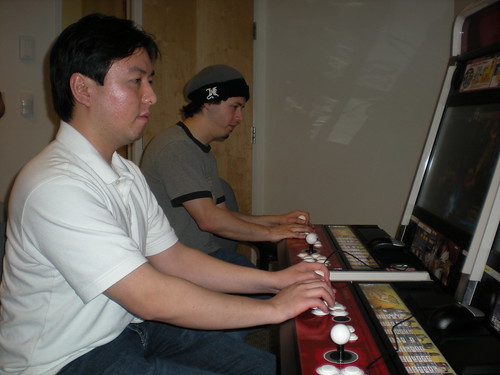 In the end, I had to rip their bloody hands away from the controls.
For the record, Alex whooped on Tony pretty badly, no matter what
characters were chosen. In fact, Alex had to lose on purpose so that he
can check out some of the other characters.

So… the moral of this story? Keep an eye out on our community sites
(blog, forums) for news of the next event, because you never know when
we’ll be extending more invites. Perhaps we’ll even be willing to fly
some of you out here too…

Starting this week, we are moving the regular Thursday OHC from 5 PM (8 EST) forward one hour so that it will begin at 6 PM (9 EST).

Tomorrows
compo will begin at 6 PM Pacific, 9 PM eastern. Again, everyone is free
to join up and submit a song. Suggestions for themes are encouraged.
Thank you!

Escariot has decided to host a four-part harmony compo, as detailed on the OCR forums. The idea was born while brainstorming in #ocremix, this is a compo where we will create an original sung 2-4 part harmony piece in accordance to the theme – for this first one, lyrics are provided.

Hello and welcome!
This post is a spur of the moment thing, and completely and totally impulsive.
Hello, and welcome to FPHC01!~
FPHC stands for Four-Part Harmony Competition, and this compo will take entries based on themes or lyrics where the entrant has written a multi-part harmony to fit the theme.
RULES:
1) Entrant must write a 2, 3, or 4-part harmony which uses most, if not all, of the words provided in sequence, or repetition. (Use common sense).
2) Entrants are NOT ALLOWED TO USE ANY FORM OF AUTOTUNING. This includes any proper auto-tuner, vocoders, etc. Anybody caught using any autotuner will be disqualified.
3) Either upload to your own webspace, and PM me the link (DO NOT POST YOUR ENTRY IN THE THREAD OR YOU WILL BE DISQUALIFIED) or email the song to me at relaera AT gmail DOT com.
VOTING
Voting will commence via PM. And will end Sunday, 3/9/08 at 11:59PM
COMPO TO END ON 3/7/08 11:59PM
THEME
This week’s theme is brought to you by #ocremix and RizBow.
“i’m double majoring in mechanical engineering and physics, i use to draw everyday for years, but i wana pick up the pencil again, my singing is getting half way decent, i’m almost as good as frank sinatra, but i haven’t been training that much lately, i’ve reached world class status in 3 video games, i’m barely starting to play racquet ball, i have terrible flexibility and i probably will never have good flexibility”
Notes:
This will end in such a short period of time because there is already painful amounts of interest on IRC, and I just posted the link. Further FPHCs will have more advance notice… yey…

Recently overheard in a MySpace Bulletin:

We
are embarking on a U.S tour in support of Metal Kombat for the Mortal
Man starting on May 17th, tour dates are listed on our page. Please
note that these are only HALF of the dates that we will be playing.
More dates will be listed as they are confirmed.

We’d like to say that this tour is happening
thanks to all of the support you have all given us over the years.
We’ve wanted to tour for years, but have been far too poor to do so.
Thanks to you touring is now possible, and we can’t wait to meet all of
you on the road.

Also hitting the road with us will be

Look What I Did
“Look What I Did are the missing link between the Beach Boys and Lightning Bolt” – METAL HAMMER MAGAZINE
myspace.com/lookwhatidid

See you on the road!