Hey guys & gals, the AR Halloween contest is over. We have four
very different entries from four very special guys ;). Anyway, if you
like anime music, check this votepack out and send me votes if you
like. Order the songs from best to worst and I’ll put them in my
magical compo vote machine and it’ll spit out fancy results. PM me if
you’re a member of any forums we go to together, or email me [overcoat
at gmail dot com] and vote that way.
I was unfortunately unable to do anything this year, but who cares? AR is dead. LoL~!!

From the Dethklok MySpace Blog:

You will be able to play Guitar HERO II (available in NOVEMBER) with DETHKLOK.
It will be in the ‘unlocks’ section along with some other secret music from other bands.

Bad Dudes EP is a community album put together by Mustin and friends. Except it doesn’t have anything to do with Bad Dudes. The album is a collection of arrangements of “boss, battle, or just all-around tough track(s).”
The full credited track list is as follows:

This week on the show all about the music and community of OverClocked ReMix:

Uh oh, pixietricks is missing! What is a zircon to do? Why, call upon
an old friend that longtime listeners of our show should remember;
Fusion2004! If you’re not familiar, he runs his own radio show about
video game music and is the main coder for ThaSauce (which in and of
itself is about video games and VGM). We figured he’d make a fine guest
host while our dear pixietricks attends to all matters Peabodian. So,
ladies, enjoy this male-only foray into the wonderful world of OCR
while you can! And if two male hosts aren’t enough, all three (male)
minihosts are back on board too 😉 Mmm.. testosterone.
Shownotes

I suppose there are good things to having a MySpace. Anyhow, I got this bulletin, and this is what it said. I think I posted something similar on the OCR boards, but it probably got drowned in the wastes known as General.
The bulletin read as follows:

EARS and Nettwerk are running a contest where you can create your own Sims Soundtrack Remix!

We have included 4 downloadable MP3s on our Myspace page
(www.myspace.com/thesimsoundtrack): piano, bass, xylo, and strings. A
5th MP3 is available on the official contest website:
http://nettwerk.com/simsoundtrack/

Simply download them to your computer and start remixing!

Once you have created your own track, send it to us and we’ll
choose one winning track that will be included on the new Sims
soundtrack! Imagine…your own track on a Sims Soundtrack! Cool, huh?

So, here is all the information you’ll need to get started: (For
more detailed directions check out the blog: Sims Soundtrack Remix
Contest!)

2. Transfer to your favorite audio software (we suggest:
garageband. not on a mac? you can try finding a similar program at
www.download.com)

1. Send your remix to [email protected] with the subject heading “Sims Soundtrack Contest”

2. Include your full name, e-mail, and phone number so we can get in touch with you if you win

Check out the official contest page at: http://nettwerk.com/simsoundtrack/

Today may seem like it should be listed as gaming news. It’s not.
Today, I’m going to speculate on those crazy f**ks who play horrid games ON PURPOSE. Even for the sake of reviewing them, and warning us away from such piles of putrid stench, you have to wonder what kind of immense self-hate that these people must have to willingly pick up a copy of a game that is worth less than the plastic used to make the cart or CD.
I’m sure that you’ve all read some of these reviews and webpages
and were thankful for the dry humor and informative insight into what
makes such games the crap that they are (SomethingAwful comes to
immediate mind), but really: why do they play these games?
This
being the internet you would expect people to just inform you that the
game exists and that it is playable, so you can receive scathing emails
while you laugh at the misfortune you spread but no, somewhere in their
evil hearts they found the capacity to take on the selfless task of
telling us what not to play and for very valid reasons.
(Now, I’ve
played my share of bad games but nowhere near the level of suck as
these brave and foolhardy adventurers have for which I commend them.)
So
my ultimate question is; was suicide too scary for you? Is this your
penance for some past sin? Are you doing this to earn your high school
community service hours?
Tell us, please. We’d like to know.

This morning I got an email from my Pascal, Marketing Manager over at
Lik-sang. Normally, these emails are about some sort of sale they have,
preorders for new systems like PlayStation 3, or other happy business.
But today it was about Sony forcing Lik-sang out of business with legal
bullying tactics. In general, the way Black Metal Kards of these type work
is that the company with the most resources wins and this case is no
different.

Forget that Lik-sang was merely an exporter, a practice which is
completely legal in most countries in the world. Forget that they were
about giving gamers choice (and free stickers with every order). Forget
that while Sony dropped the ball on the PS3/PSP launches in Europe and
Australasia, Lik-sang tried to give those gamers what they wanted.

Rather than retelling the whole sordid story, I decided it’d be best to give you the press release unfiltered.

Hong Kong, October 24th of 2006 – Lik-Sang.com, the
popular gaming retailer from Hong Kong, has today announced that it is
forced to close down due to multiple legal actions brought against it
by Sony Computer Entertainment Europe Limited and Sony Computer
Entertainment Inc. Sony claimed that Lik-Sang infringed its trade
marks, copyright and registered design rights by selling Sony PSP
consoles from Asia to European customers, and have recently obtained a
judgment in the High Court of London (England) rendering Lik-Sang’s
sales of PSP consoles unlawful.

As of today, Lik-Sang.com will not be in the position to accept any
new orders and will cancel and refund all existing orders that have
already been placed. Furthermore, Lik-Sang is working closely with
banks and PayPal to refund any store credits held by the company, and
the customer support department is taking care of any open transactions
such as pending RMAs or repairs and shipping related matters. The staff
of Lik-Sang will make sure that nobody will get hurt in the crossfire
of this ordeal.

A Sony spokesperson declined to comment directly on the lawsuit
against Lik-Sang, but recently went on to tell Gamesindustry.biz that
“ultimately, we’re trying to protect consumers from being sold hardware
that does not conform to strict EU or UK consumer safety standards, due
to voltage supply differences et cetera; is not – in PS3’s case –
backwards compatible with either PS1 or PS2 software; will not play
European Blu-Ray movies or DVDs; and will not be covered by warranty”.

Lik Sang strongly disagrees with Sony’s opinion that their
customers need this kind of protection and pointed out that PSP
consoles shipped from Lik-Sang contained genuine Sony 100V-240V AC
Adapters that carry CE and other safety marks and are compatible world
wide. All PSP consoles were in conformity with all EU and UK consumer
safety regulations.

“Today is Sony Europe victory about PSP, tomorrow is Sony Europe’s
ongoing pressure about PlayStation 3. With this precedent set, next
week could already be the stage for complaints from Sony America about
the same thing, or from other console manufacturers about other
consoles to other regions, or even from any publisher about any
specific software title to any country they don’t see fit. It’s the
beginning of the end… of the World as we know it”, stated Pascal
Clarysse, formerly known as the Marketing Manager of Lik-Sang.com.

“Blame it on Sony. That’s the latest dark spot in their shameful
track record as gaming industry leader. The Empire finally ‘won’, few
dominating retailers from the UK probably will rejoice the news, but
everybody else in the gaming world lost something today.”

Hey guys, If you don’t know already, I’m
releasing my album on December 1. I need help with my cover art. I’m
running a competition on my website. I’ve posted some rough guidelines,
and I’m hoping the rest of the community will help me out when I need
it.

If you’re at all skilled with graphic design, then please put your skills to a worthy cause. I don’t require much.

The details are at:

A fan was cool enough to Bootleg my 10/20 performance at The Western
Front in Boston, opening for Optimus Rhyme and MC Frontalot. He got
every track in the 11 song set except for the first. The background
instrumnetlas are a little low in the recording, which suits me fine,
as I’m already pretty familiar with them, and it is, after all, a
bootleg, so some muddiness in the recording is to be accepted, if not
expected. Check it out, though! There’s a cool version of Blood on the
Asphalt, from my Street Fighter 2 remix project of the same name.

Shael also adds, “The New York show the following night was something of a disaster! Likely I will explain in a post upcoming.“ 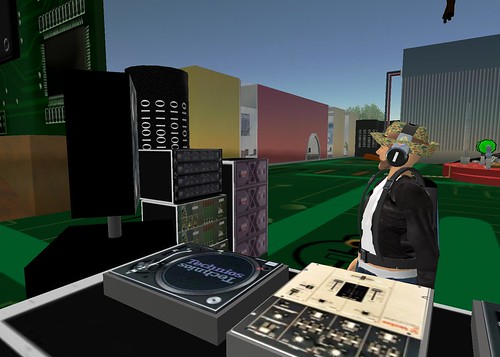