The Bad Dudes (ie: Mustin and friends) have released a new EP entitled Zombies Rocked My Neighbors. Here’s a quote from the web site:

“The Bad Dudes are back with another EP of some freaky business for you all. It’s
Halloween and time to scare some kids. So we deliver unto you some scary tracks
(and well, some not so scary tracks, but they rock anyway). Put them on your
Haunted House playlists for the neighborhood kids or just freak out your friends
by locking them in the closet for a few weeks, not feeding them, and making them
listen to zyko. ouch. Enjoy this freaky business and we’ll deliver more sooner
than later.”

This album features remixes from Legend of Zelda: Twilight Princess, Castlevania: Symphony of the Night, and more. To pick it up, check out the OneUp Studios web site.

That’s right folks. OUS is back with a shiny (and muy cool) new site design. Hook up the smell-o-vision, and enjoy the new but not quite new but totally refurbished and pretty much kinda awesome internet site smell. WITH A VENGEANCE. They have some EPs (with some rad cover art by 8bitmaximo) ready to download for free, though true to OUS fashion, you are strongly encouraged to donate. Be sure to check it out. 😉

All CDs are now $5.00 and the remaining T-Shirts are $10.00. The Very Best of SEGA and Xenogears Light | an arranged album will not be reprinted when sold out.

Time & Space (even if back ordered until late June) is well worth $5.

Mustin just announce the launch of TheOneUpsLive.com, a website for their upcoming concert & gaming tournament. Additionally him & Dale North have just released “More Than Mario” which is availible through a donation on the webpage. Lastly Mustin’ll be on this week’s episode of VG Frequency with Larry, so be sure to check that out starting at 10PM EST tonight (Saturday). 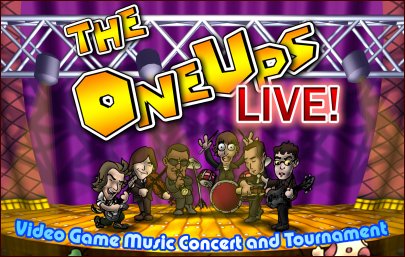 Check it out folks because the Web site is up and tickets are on sale! Things are going well for the concert. We’re looking at getting sponsorship by our local EB Games and GameStop, along with some donations from our local gaming stores. My new friend Rick will be bringing at least six arcade games with him in addition to the Street Fighter II Arcade Game that we’ll be giving away in the tournament, so we’ll have some great arcade games on free play at the event. The University of Arkansas gaming clubs are getting ready to run the tournaments, and we’re also getting ready to set up radio promotions which will play on our local radio stations. Once the radio commercials start, the tickets will get eaten up pretty quick, so if you’re coming from out of town, make sure you buy your ticket sooner than later.

Dale North and Mustin have finally finished their More Than Mario album and you can get a copy by making a donation through the More Than Mario Web page. Just head to the site to check out the album demo and find out all of the details!

The OneUps will be playing live at J.R.’s Lightbulb Club in

Fayetteville, Arkansas. This will be their public CD Release

party so everyone come on down and PickUp a copy of the new album, The OneUps Volume 1.

J.R.’s is located at 21 N Block Street just off the town square.