But wait, there’s more! If you happen to be a Video Game Orchestra fan, there’s a special treat for those who live in Pittsburgh, Pennsylvania:Â The VGO creator and director Shota Nakama will be performing with his guitar at the Distant Worlds concert on February 25, 2012 at 8PM. Song highlights include “Eyes On Me” featuring Susan Calloway, “Dear Friends” and “Vamo’ alla Flamenco”Â featuring guitarist Mr. Nakama, “Zanarkand”,Â “Maria and Draco”, “The Man With The Machine Gun”,Â “Blinded By Light” and “Aerith’s Theme”.

While the first concertÂ performanceÂ will be in Pittsburgh, the tour will roam around North America with stops in Ontario, Boston, St. Louis, and Toronto fromÂ FebruaryÂ to March. Be sure to check out the official Distant Worlds website to get your tickets for this special, once-in-a-lifetime opportunity. 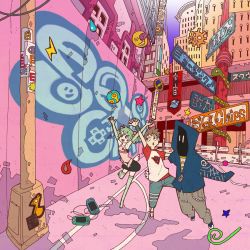 Any Final Fantasy fanboys in the house? If so, you’re in for a treat. Featuring arrangements from talents such as DJ OMKT & MJ, Hige Driver, Hidekazu Tanaka, Sexy-Synthesizer, Shisotex, (S_S), 203soundworks, Yoshino Yoshikawa, muZik, the3rdmimi, Mitsuto Suzuki, Another Infinity, and Q/11A E0, Square Enix’s highly anticipated album borrows original masterpieces from the likes of Uematsu and Kikuta and masterfully takes each song to a different level. In other words, you are most likely to experience heightened states of euphoria while listening to this stunning record.

And remember, SQ Chips features a wonderful list of tracks, including some surprises from Nanashi no Game, Einhander, Final Fantasy XIII, among many others. Here’s your chance to preview one of the most anticipated albums of the year — get to it!