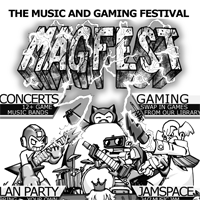 Predicted to be the â€œabsolute biggest year everâ€, the 10th annual Music and Gaming Festival has just been announced.Â  If youâ€™re unaware of one of the most anticipated events in VGM community, get in the know: started by Brendan Becker in 2002, MAGFest is an annual event by fans devoted to the celebration of video games and video game music for fans. Since then, attendance has increased drastically while MAGFestâ€™s theatrics get bigger and better each and every year.

An official MAGFest announcement has confirmed mind-blowing performances from Random Encounter and The Megas as well as appearances from special guests Arin â€œEgoraptorâ€ Hanson, mastermind behind the “Awesome” series of flash video game parody cartoons, and Jon St. John, the voice responsible for the badassery of the Duke Nukem weâ€™ve grown to love. More guests and musicians will also be announced soon.

MAGFest X will be held at the Gaylord National Resort & Convention Center in National Harbor, Maryland on January 5-8, 2012. Pre-register today to ensure your attendance to one of the most exciting events of the year!